If you're a library author or writing a cross-platform application then .NET Core is great but it throws up the question, how do you test that your code works on all operating systems? Well the answer is simple, you build and test your code on each platform.

In Andrew's blog posts, he writes PowerShell (Windows) or Bash (Mac and Linux) scripts to build, test and deploy his code. There were two problems here.

Cake lets you write your build, test and deployment script in C# and it provides lots of helper methods to get stuff done making your script very terse. You can get syntax highlighting and intellisense for your Cake scripts by installing the Visual Studio or Visual Studio Code extensions.

Building and testing your .NET Core code using Cake is dead dimple. Grab the build.cake, build.ps1 and build.sh files from the Cake Getting Started guide and drop them at the root of your project. Here is an example of my project and the files we'll be dealing with in this post: 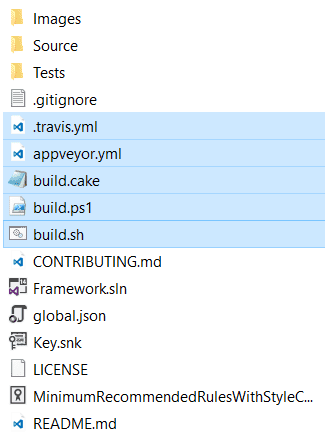 The build.ps1 and build.sh files are shell scripts that download the Cake executable and execute the build.cake C# script. They also take any parameters that are passed to them and pass them onto your cake script. Now paste the following into your build.cake file:

At the top of the script some arguments are defined. Values for these arguments can be set by passing values to the shell scripts via command line, they can come from environment variables or they can come from continuous integration build systems that Cake knows about (It knows all the common ones including TFS, TeamCity, Jenkins and Bamboo). In the above script I show how to get a build number from AppVeyor or Travis CI if the script is currently being run using those systems. This makes the code very short, terse and to the point.

The rest of the script is made up of a series of chained tasks which execute one after the other, starting with the task with no dependencies. Alternatively you can pass in a Target argument which specifies which task you'd like the script to start executing from. A key thing to note is that the script does not need to know about any file names or file paths, everything is done by convention.

One very important effect of using Cake is that your build script is easily testable. I've used many continuous integration systems that have their own proprietary tasks and when a slower build fails, debugging it was a nightmare, since it could only be done on the build machine. Since Cake is just a script, you can run it on your local machine and test it to your hearts content which gives you a quicker tighter development loop.

AppVeyor is my favourite CI system but only works if you are hosting your code with Git based repositories and it only runs builds on Windows. All you need to do is sign-up, enable AppVeyor for your git repository and add an appveyor.yml file which is in YAML format. Here is one of my commented appveyor.yml files:

It basically executes the build.ps1 file at the root of my project and collects all the NuGet package and XML unit test result files in my artefacts folder. I also set some environment variables to turn off some lesser known .NET Core features for a faster build.

AppVeyor, knows about NuGet and I use AppVeyor as my primary build system to publish my NuGet packages (You don't want AppVeyor and Travis CI both publishing your NuGet packages). Now I could have created a task in my cake file to publish NuGet packages and only execute that task if I was running on AppVeyor but AppVeyor has a pretty easy to use configuration file that I've chosen to do this step instead.

To publish packages to NuGet, you sign-up and receive an API key. Of course, you don't want to share that with the whole world by checking it into GitHub or Bitbucket, so AppVeyor lets you encrypt it and paste the encrypted value into the appveyor.yml file.

Travis CI is very similar to AppVeyor but it targets both Mac and Linux. All you have to do is sign-up, turn on Travis for your repository and stick a .travis.yml file in the root of your project. Here is mine:

You'll notice that we are specifying that we want to build our code on both Mac and Linux. Travis CI will actually run one build for each operating system. We then specify some details about the version of operating system we want to use and what we would like to install on them.

Once again, I set the .NET environment variables to make the build a bit quicker and finally we run the build.sh Bash script to kick things off. Note that you need to run the following command to give Travis permission to execute the build.sh file (This is Linux after all):

Another thing to note is that if you are still using the older xproj project system and your unit tests are using xUnit, then your tests will not run due to this bug. There is a very nasty workaround in the link.

If you want to learn how to add AppVeyor and Travis CI build status badges to your Git repository ReadMe or learn how to deploy to MyGet/NuGet using tags, I recommend going back to read Andrew's blog post which is still useful. If you're looking for more examples of Cake build scripts, you can take a look at the following Cake repositories: