A Simple and Fast Object Mapper

Why use an Object Mapper

This is a really good question. Most of the time, it boils down to using Entity Framework. Developers want to be good citizens and not expose their EF Core models in the API surface area because this can have really bad security implications (See overposting here).

I have received a lot of comments at this point in the conversation saying "Why don't you use Dapper instead. Then you don't need model classes for your data layer, you can just go direct to your view model classes via Dapper". Dapper is really great, don't get me wrong but it's not always the right tool for the job, there are distinct disadvantages to using Dapper instead of EF Core:

You need to use the right tool for the right job. I personally use Dapper, where there is an existing database with all the migrations etc. already handled by external tools and use EF Core where I'm working with a brand new database.

What is good about Automapper?

Automapper is great when you have a small project that you want to throw together quickly and the objects you are mapping to and from have the same or similar property names and structure.

It's also great for unit testing because once you've written your mapper, testing it is just a matter of adding a one liner to test that all the properties in your object have a mapping setup for them.

Finally if you use Automapper with Entity Framework, you can use the ProjectTo method which uses the property mapping information to limit the number of fields pulled back from your database making the query a lot more efficient. I think this is probably the biggest selling point of Automapper. The alternative is to write your own Entity Framework Core projection.

What is wrong with Automapper?

Cezary Piatek writes a very good rundown of some of the problems when using Automapper. I'm not going to repeat what he says but here is a short description:

A Simple and Fast Object Mapper

I wrote an object mapper library that consists of a couple of interfaces and a handful of extension methods to make mapping objects slightly easier. The API is super simple and very light and thus fast. You can use the Boxed.Mapping NuGet package or look at the code at on GitHub in the Dotnet-Boxed/Framework project. Lets look at an example. I want to map to and from instances of these two classes:

The implementation for an object mapper using the .NET Boxed Mapper is shown below. Note the IMapper interface which is the heart of the .NET Boxed Mapper. There is also an IAsyncMapper if for any reason you need to map between two objects asynchronously, the only difference being that it returns a Task.

And here is an example of how you would actually map a single object, array or list:

I told you it was simple! Just a few convenience extension methods bundled together with an interface that makes it just ever so slightly quicker to write object mapping than rolling your own implementation. If you have more complex mappings, you can compose your mappers in the same way that your models are composed.

I even got a bit of help from the great Jon Skeet himself on how to improve the performance of instantiating an instance when using the generic new() constraint which it turns out is pretty slow because it uses Activator.CreateInstance under the hood.

This benchmark measures the time taken to map from a MapFrom object to the MapTo object which I show above. 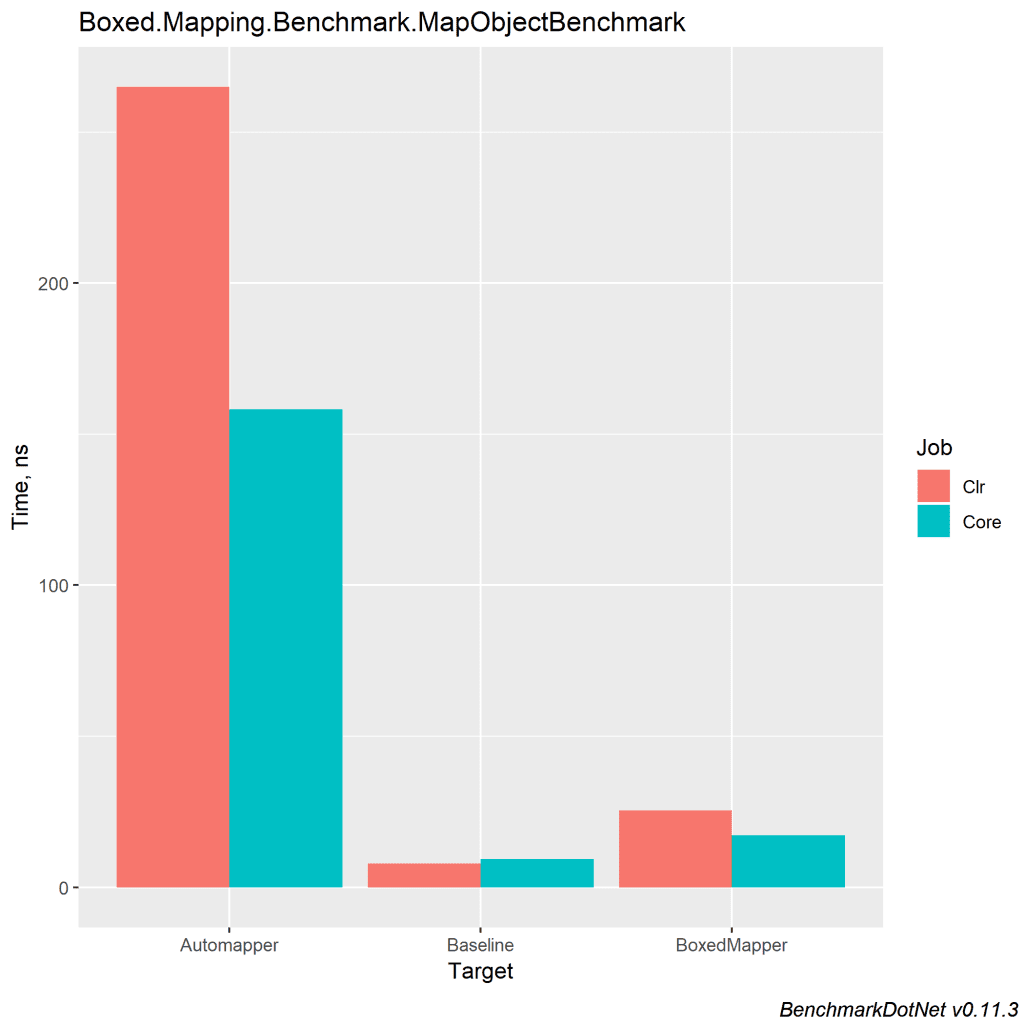 This benchmark measures the time taken to map a List of MapFrom objects to a list of MapTo objects. 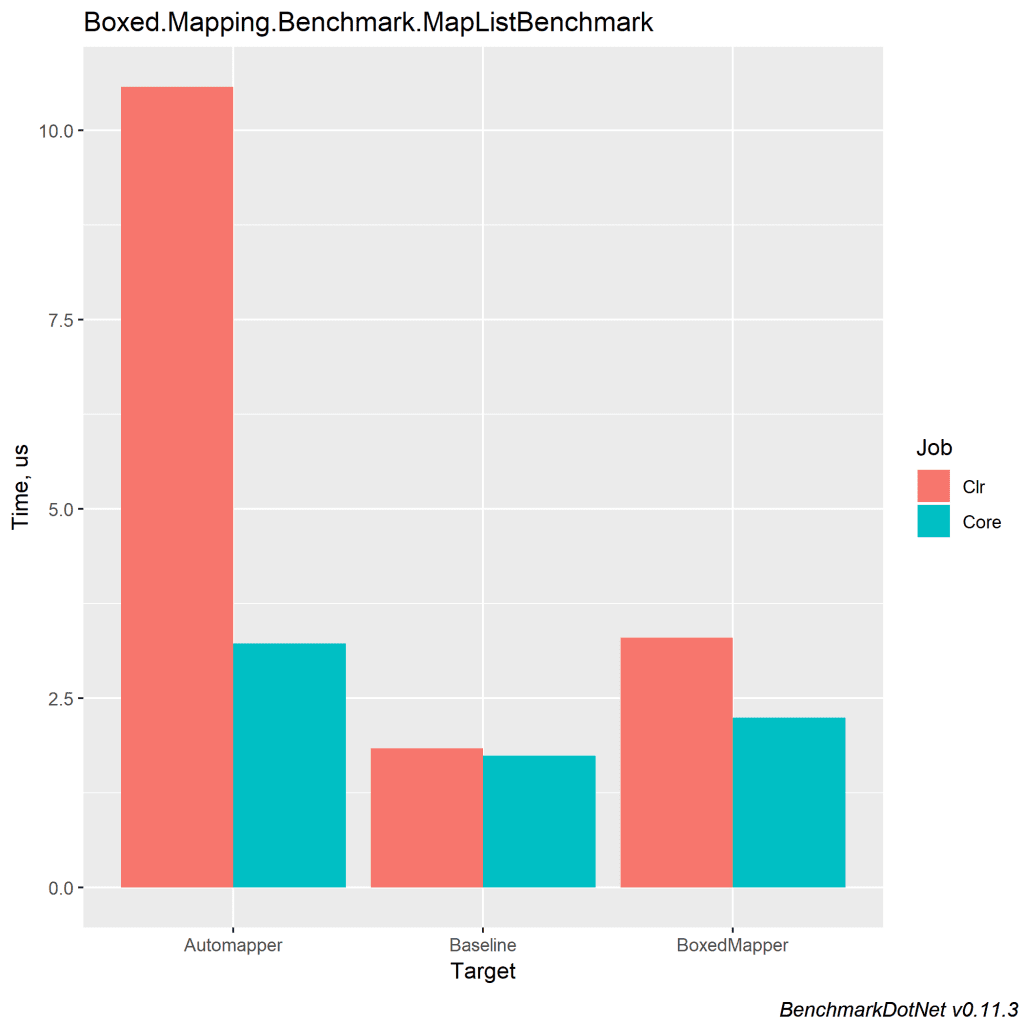 It turns out that Automapper does a really good job on .NET Core in terms of speed but is quite a bit slower on .NET Framework. This is probably down to the intrinsic improvements in .NET Core itself. .NET Boxed is quite a bit faster than Automapper on .NET Framework but the difference on .NET Core is much less at around one and a half times. The .NET Boxed Mapper is also very close to the baseline but is a bit slower. I believe that this is due to the use of method calls on interfaces, whereas the baseline mapping code is only using method calls on concrete classes.

.NET Boxed has zero allocations of memory while Automapper allocates a small amount per mapping. Since object mapping is a fairly common operation these small differences can add up over time and cause pauses in the app while the garbage collector cleans up the memory. There seems to be a trend I've seen in .NET for having zero allocation code. If you care about that, then this might help.

What I've tried to do with the .NET Boxed Mapper is fill a niche which I thought that Automapper was not quite filling. A super simple and fast object mapper that's just a couple of interfaces and extension methods to help you along the way and provide a skeleton on which to hang your code. If Automapper fits your app better, go ahead and use that. If you think it's useful, you can use the Boxed.Mapping NuGet package or look at the code at on GitHub in the Dotnet-Boxed/Framework project.